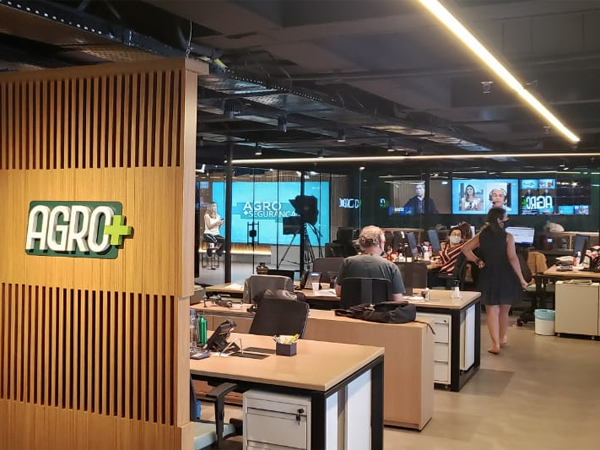 WEYBRIDGE, UK, 16 JULY 2020: Leading playout automation and channel in a box specialist, Pebble Beach Systems, today announced that Brazilian broadcaster TV Bandeirantes (known as Band) has launched its new Agro+ channel with Pebble’s Marina and Dolphin systems at the heart of its operation.

Agro+ is a specialised channel aimed at the country’s vital agribusiness industry and was launched on 22 June. With programming covering all aspects of the industry, the fully file-based channel is split across two sites, with its main headquarters in Brasilia and Master Control based in São Paulo. Pebble’s flagship Marina automation solution controls Dolphin integrated channel devices which handle branding, graphics and loudness control for the channel. The original technology was installed by Pebble’s local reseller, Videodata, who also carried out the remote commissioning for this new launch.

“The system must be fast and responsive as we have operations in two cities; all our engineering is based in São Paulo while the Agro+ studio and newsroom are in Brasilia” comments Thiago Perrella, CTO at TV Bandeirantes. “It was also a project with an extremely tight turnaround, which, of course, was given added complexity by having to be accomplished under lockdown procedures.”

Despite the obstacles due to lockdown restrictions, the installation was complete in record time. There was less than 10 days between the date the order was received, to the automated playout channel transmitting live, which is a significant achievement under current economic circumstances. All installation, commissioning and training for the new channel was also successfully carried out remotely by the experienced Videodata team who were working from home.

“Agro+ was a unique challenge because of the limitations of the ongoing health pandemic” says Marcelo Blum, Architecture and Technology Manager at Videodata. “By utilising the existing hardware platform already installed at Band, and implementing NDI outputs for the preview signals, the implementation could be completed in record time with no need for new hardware on premise. This is certainly the first time we have taken a new channel to air completely remotely, and the experience proved to be a great success thanks to Pebble.”

The Bandeirantes Network has been a Pebble Beach Systems customer since 2008 and has a large playout automation system including more than 30 master control playlists and nine news and production switchers, with MOS integration for newsroom systems. In 2019 it launched the Smithsonian Channel in Brazil, fully based on Pebble’s technology, with local support also provided by Videodata.

“We have forged a strong relationship with Band over the past 12 years and we are delighted to be working with the Videodata team again, especially on this unique mission of launching a new channel during the current pandemic,” comments David Russin, VP of Sales for the Americas at Pebble Beach Systems. “The remote operations that Agro+ is based on are becoming more commonplace as organisations look increasingly to distributed workflows, and we are delighted that Marina and Dolphin were so vital in taking it to air with such speed, ease and simplicity.”